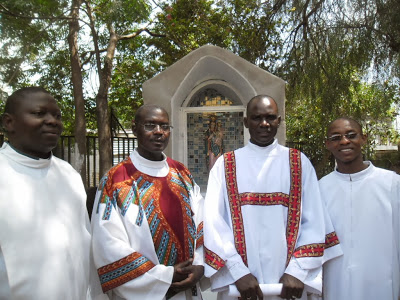 In their joint letter on the year of the founder, the two superior generals of the IMC and MC concurred that over the years the knowledge of the Blessed Joseph Allamano has become widespread in countries where the Consolata Missionaries are present. His icons adorn many local churches and chapels, many others have been dedicated to him, many publications have been issued about him and people invoke his name to get graces and favours.

However, the general superiors expressed their fear that with the passage of time, the interest in the person of our founder and the commitment and enthusiasm to spread the devotion to him as a father and teacher of missionaries has diminished. It is in this respect that the year 2013-2014 has been dedicated to Blessed Joseph Allamano to help re-awaken his spirit in our midst. Many Consolata Missionaries have embraced this call with gusto and have hit the ground running promoting the person of our founder calling on those we serve to pray through his intercession especially now that we are looking for a miracle that will help promote him to the rank of saints.

In Madadeni, the 16th day of February was declared Allamano Day, during which the parish officially opened the year of the founder. The day was preceded by various activities to help sensitize the Christians on the importance of Blessed Joseph Allamano to us Consolata Missionaries and to the church in general. During the four Sundays leading to the Allamano day, we talked about our founder especially focussing on the following themes: how to become a missionary in the mind, in the heart and in the mouth, first saints then missionaries, how to be a missionary with the missionaries and the famous anthem they shall proclaim my glory to the nations. We also had the novena to our Founder which was animated by various Consolata Missionaries – Fr Rocco Marra, Fr Joseph Mang'ongo, Fr Daniel Kivu'wa, Deac Francis Onyango and Br Mandla Makhanya. The last day of the Novena was dedicated to the young people. Fr Daniel who works in the office of MAVP had activities with hundreds of children in the morning and also with a large number youth later in the day culminating with the Eucharistic Celebration in the evening.

The Consolata missionaries Community have been in Madadeni since 1994 and on Sunday during the Allamano Day in a mass that was presided by Fr Joseph Mang'ongo, Fr Rocco who is currently the parish priest applauded the work that we have done so far. He eulogized all the missionaries who have worked in the parish. Calling each of them by name and showering them with praise and gratitude for the hard work they did. They may have left Madadeni, but their names and their contribution towards bringing consolation and nurturing the faith of the people of Madadeni remains in the heart and minds of the people they served so well.

The climax of the day was the unveiling of the Consolata Grotto. As missionaries we know that we will never be around forever. However, once we leave, what sign will show that there were once Consolata Missionaries in the parish? This was the question that led to the idea of erecting a Consolata Grotto at Regina Caeli. The community of Merrivale who also joined us to celebrate the Allamano Day, in their generosity of heart had offered the parish the statue of our lady Consolata which now adorns the perimeters of the parish. It offers yet another opportunity for Christians to offer their prayers to God through the intercession of Our Lady Consolata.