How about the South Korean education system?

The South Korean society has high regard for education.  In fact, it’s hard to find another country in the world that places greater emphasis on education than South Korea. Educational attainment in contemporary Korea is of paramount social importance and strongly correlated with social mobility, income levels, and positions of power. Graduates of Korea’s top three universities (SKY:  Seoul, Korea and Yonsei) dominate the country and occupy the majority of high-ranking government posts and management positions in Korea’s powerful business conglomerates (chaebols).

Competition over admission into top universities is consequently extremely fierce, underscoring South Korea’s reputation for having one of the most merciless education systems in the world. This system is usually described as “stressful, authoritarian, brutally competitive, and meritocratic.” Consider that the country’s students devote more time to studying than children in any other country. Parents spend large parts of their income on private tutoring in what has been dubbed an “educational arms race’. The country is said to have the largest private tutoring industry in the world.

By some accounts, many Korean children spend 16 hours or more a day at school and in after-class prep schools, called hagwons. High school students barely get enough sleep because they study until late night. They also have less than two hours of spare time on weekdays. This kind of study program is hectic or demanding so to speak. This has led to the Korean society being described as having an “almost cult-like devotion to learning,” with students being “test-aholics” steered by “tutor-aholic” parents. Studying long hours at hagwons has become so ubiquitous and excessive. 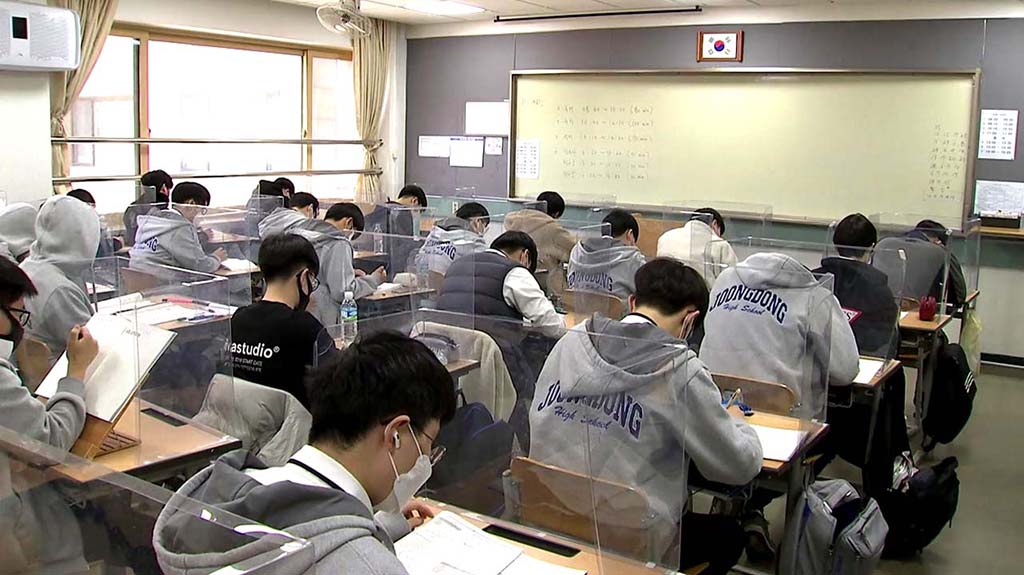 Unfortunately enough, this extreme competitiveness has created a number of social problems: Suicide, for instance, is the leading cause of death among teens in Korea, which has the highest suicide rate in the recent times. Student surveys have shown that poor grades and fears of failure are major reasons for suicidal thoughts, while Korea simultaneously has a growing teenage drinking problem.

The current president, Moon Jaein, is working into making better reforms in the education sector. Current policy initiatives focus on decreasing competition in university admissions.  This will make access to education and employment more socially equitable, and reducing the influence of prestigious universities, notably the country’s top three institutions: Seoul National University, Korea University, and Yonsei University, collectively referred to as “SKY universities”. Since admissions tests at top universities are so demanding that they can only be passed with the help of extensive private tutoring, the government in 2017 ordered several universities to ease their admission tests. This move is intended to curb private tutoring and improve the chances of students from low-income households, who are unable to afford expensive prep schools.

Even amidst these challenges, Korea’s high educational attainment levels are but one sign of the country’s singular transformation and meteoric economic rise over the past 70 years.

On Thursday 3rd  December of the year 2020, nearly half a million students took the annual College Scholastic Ability Test. Known as Suneung in Korean, it’s a multiple-choice standardized test but with considerably higher stakes in education-obsessed South Korea.

The eight-hour exam determines not only which university one can attend, but also future career opportunities, social standing and even marriage prospects. Students spend days and long evenings at expensive private hagwons schools preparing for the hypercompetitive exam. This year's exams were postponed by two weeks due to virus-led disruptions in the academic calendar.

The day before the exam, South Korea had reported 583 new coronavirus infections, the biggest one-day jump in eight months, with another 540 cases reported on the day of the exam. The covid-19 challenge had far reaching consequences as far as the suneung is concerned. This year, were asked to wear full protective gear to supervise the exam for at least 35 confirmed covid-19 patients and some 400 students in quarantine. For this group, test papers were put in plastic bags and disinfected before grading.

It’s a rather unusual setting, but the patients took the exam in a calm manner.  For example In one medical centre within Seoul city, beds were pushed out as desks were brought in. Five covid-19 patients took the test in a “negative pressure ward” designed to keep infectious germs from spreading outside. At test venues, plastic dividers were set up to separate desks, and students were required to wear masks at all times.

In previous years, Suneung exam mornings kicked off with the sound of younger students cheering for their seniors as they walked into the test centre. That ritual was banned this year, for fear of spreading the coronavirus, and replaced with temperature checks as well as hand sanitizing. The students were also discouraged from gathering and talking during breaks. They were also required to carry their own food and water and to consume these at their desks. Being winter, they were also supposed to dress warmly as windows in the rooms were opened to ensure the circulation of fresh air.

Over the previous years’ suneung, even without the masks and plastic shields, students are always left nervous. How about this year amidst the covid-19 pandemic and given that this exam determines one’s future?  It is more hectic, a very tense environment indeed.

On a typical Suneung day, South Korea falls into great silence. This is to provide an ample environment for the students to tackle the exam. Air traffic is grounded as military exercises are all suspended. To make sure no student is late for the exam; many companies delay their start time so that roads are clear in the morning. Even the stock market opens an hour late. Late students are also escorted to schools by police officers. Moms pray, hoping that their child would not have to live through another year of sleep-deprived nights. In short during this day, there is always a tense air across the nation over life-defining exam.

One interesting thing to note is that during the English listening test, which is normally done in between 1pm to 2pm, all planes are strictly banned from taking off or landing. This happens across the country. Is it not interesting to hear this?

Health Officials issued stern warnings against young people going out to unwind after their exhausting endeavours, because it may aggravate the spread of the virus. With this in mind, students could not have fun or make celebrations after the exam. The covid-19 turned an enemy to all these plans. Officially, every student's individual score is published on a national website, one month after the exam

This year, South Korean students faced a double challenge: Suneung in the heart of covid-19 pandemic. However, given the health measures in place, the exam was successfully carried out. Indeed suneung was unstoppable even amidst covid-19 pandemic. I envy this kind of intelligent organization and planning that led to a successful completion of this very important exam as far as South Korean education is concerned.

* Fr. Geoffrey Boriga Ong'era is a Consolata Missionary from Kenya and has been working in South Korea for the last five years.

Mission experience and a messa…

Clima: a Parigi il One Planet …