The Contribution of the Church in achieving SDG’s Target 8.7: An assessment of Santa Marta Group (SMG) in the light of Covid-19. 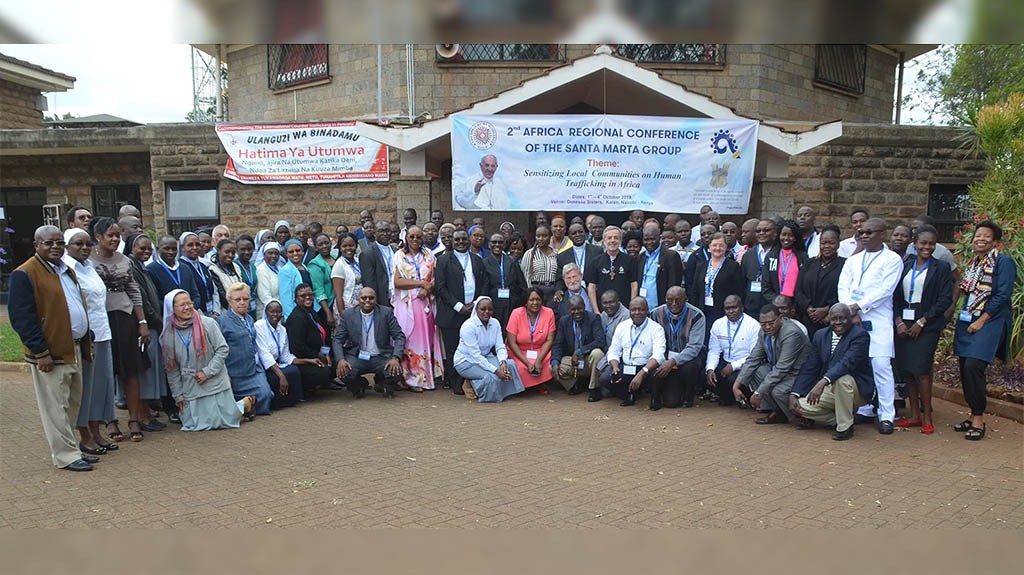 The Santa Marta Group (SMG), is an alliance of the Catholic Church and law enforcement chiefs working together with civil society to counter Human Trafficking (HT). The 3rd SMG Africa Conference was held online on September 23-24, 2020, due to the COVID-19 restrictions.

Several themes were discussed that highlighted the weakness of systems in the church, in the governments and the society at large that clearly manifested itself during the outbreak of the Corona virus pandemic. The high risk was noted for not reaching the targets underlined in the Sustainable Development Goals article 8.7 “Take immediate and effective measures to eradicate forced labour, end modern slavery and Human Trafficking and secure the prohibition and elimination of the worst forms of child labour, including recruitment and use of child soldiers, and by 2025 end child labour in all its forms”. In a particular way, Mozambique, Kenya, and Nigeria presented cases of interventions in care, protection, and reintegration process of victims. It is sad to note that many syndicates are invented every other day that continue to jeopardise the efforts already put in place to support the vulnerable in the society and towards achieving SDG’s target 8.7.

There is urgency for the Church, Governments and Civil Society to take up the responsibility and moral obligation to this very important and noble cause to cure the society. The horrific organ harvesting, sell of children and commoditization and exploitation of persons for sex and servitude businesses is spreading across. This is inhumane and is a great indication of moral decadence that continues to dehumanize the society and it can only get worse with time unless we do something in our different yet very effective capacities. One notable obstacle to the process of eradicating HT is the clandestine practices and cartels supported by people who hold the greatest responsibility in society.

The underlying conditions among others include but not limited to only these; poverty and lack of sharing of resources, joblessness, bad governance and corruption, egoistic politicking, unlimited and uncontrolled use of the internet and very significant the Covid-19 lockdowns. The issues of war and conflict in many African nations, the status of the family and especially the fate of women pose another set of problems. A false promise to better living has been used as an alternative to peoples accrued problems.

It was noted with great concern the continuation of migration of peoples from Africa to Europe and the Middle East countries based on pseudo-promises of green pastures and an invention of non-existing opportunities for jobs. These Middle East and European governments have the opportunity to reverse the situation by effecting laws that protect against abuse, forms of modern slavery and mistreatment of persons. African governments have their role to prioritize livelihood of their citizens to avoid the inevitable movements.

It is high time for everyone to own and become a key player in the war against HT because it “is an open wound on the body of contemporary society, a scourge upon the body of Christ. It is a crime against humanity.” – Pope Francis.

Despite the challenges, the conference also noticed indicators of outstanding hope. Several ongoing studies, enormous collaborations and team working with concrete action points against HT have been witnessed in the last years. SMG is one vivid example among other initiatives that have been undertaken to bring the situation to a minimum. There are also several efforts of various groups of the civil society, media, religious institutions, government departments and individual offering legal process, hospitality, solidarity, and fraternity to victims.

“…whatever insults human dignity, such as subhuman living conditions, arbitrary imprisonment, deportation, slavery, prostitution, the selling of women and children; as well as disgraceful working conditions, where people are treated as mere tools for profit, rather than as free and responsible persons; all these things ... do more harm to those who practice them than those who suffer from the injury. Moreover, they are supreme dishonour to the Creator”. (Vat. II, Gaudium et Spes, #27; ref 1 Tim. 1:8-11)

In the continuation of the Covid-19 pandemic and in circumstances of future pandemics the Church to take the lead to help the society to reclaim and to reinstate the lost human dignity. There is urgency for the custodians of the society; the parents, the government, and the religious institutions to take up their roles to safeguard humanity from all forms of slavery especially during the pandemic when all comes to standstill.

1        The church to spearhead continuous and joined training, empowerment initiatives, activism, advocacy, and awareness program across the continents. Team working, access to reliable data and sharing information at all levels are indispensable if we have to overcome.

2        A need for equipment of justice systems to the law enforcement departments of the States and equally enhance the various forms of economic, institutional, political, and social empowerment of communities and individuals to protect themselves against trafficking.

3        Government agencies must give priority to prosecution, investigation and policing urgently than before. Similarly, the creation of special courts with specific preparation on HT crime to offset the workload and to fasten judgement processes.

4        Creation of job opportunities, acquisition of skills, funds for entrepreneurship or income-generating opportunities and availability of markets for products, to become the alternative opportunity against that offered by traffickers.

5        In addressing HT as a crime against humanity, the Church to closely work with the Media, their respective Governments in Africa-Europe, and the civil society organisations.

6        The church to train personnel to monitor inter-crossing routes like airports, seaports or border areas and engage with migration offices and foreign missions. Meanwhile initiate a campaign against the prostitution market and have a monitoring unit in Europe and the Middle East countries that are the big market for HT.