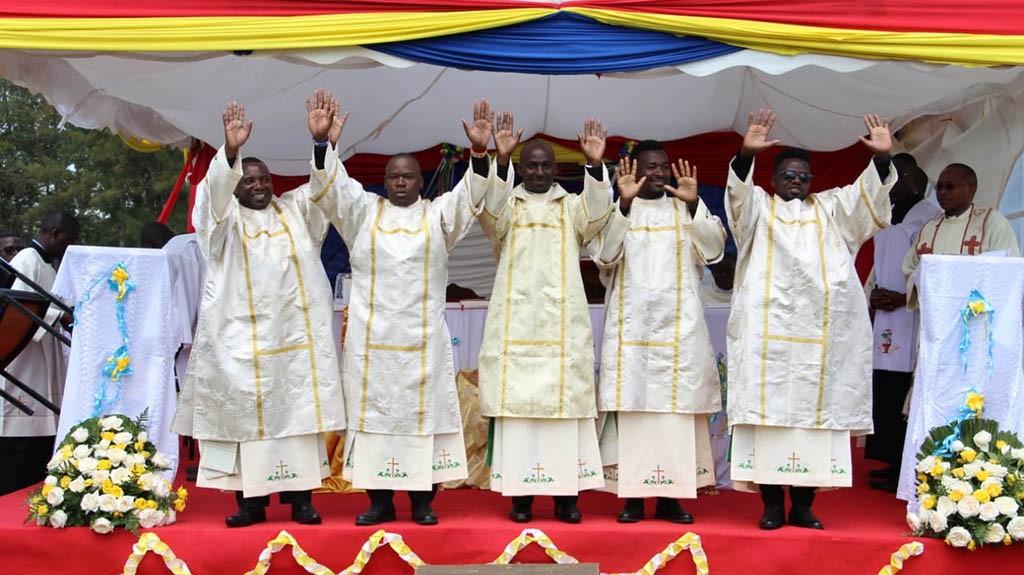 Just twenty-four hours to the celebration of the Feast of Blessed Joseph Allamano our Founder, Kenyan-Uganda Region had the grace to witness five of its members become clergy. 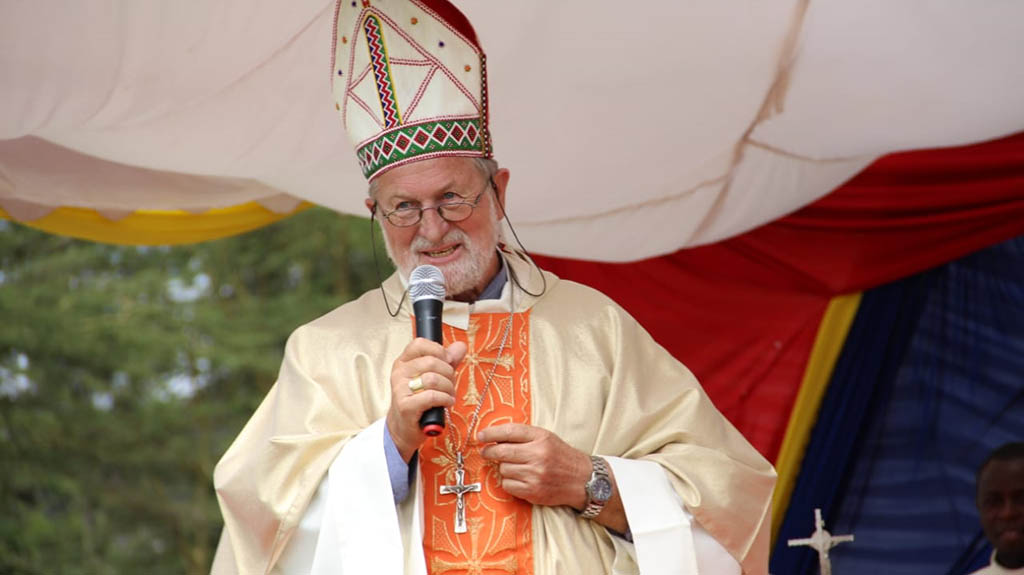 It was a serene day with little drizzles, cloudy morning and light sunlight as time tickled on.

The ceremony took place at the Consolata Seminary ground, Lang’ata Nairobi. The Eucharistic celebration, presided over by Rt. Rev. Virgilio Pante, imc with various priests concelebrants and a handful of Deacons, began at ten o’clock sharp!

In his homily, addressing the deacons-elect, the Bishop insisted on the mission to serve. The Deacons are called to serve at the Altar just like the Levites. In fact, lightheartedly, the Bishop told them that their identity has changed. They have now joined the levitic tribe. No more mkikuyu, jaluo, etc.

For them to serve the people of God very well, the Bishop continued, they “must receive the Holy Spirit through my hands as a Bishop”. Consequently the different gifts of the Holy Spirit are to help them in their ministry of service. He then reminded the deacons-elect that people lack shepherds, good shepherds for that matter. As the ministers of the Word, they “will shepherd people away from sin, especially the big sin of corruption”, via the Word of God. They will tend to the sick, the poor and the less fortunate in the society.

Finally, he advised them to be humble in their duties. Humility even if the act of the ordination adds a title of reverence to their name.

After the sacred intonation of the litany of supplication, the candidates received three major symbols.

Primo: the laying on of hands. The Bishop laid his hands on the elect, in silence. This gesture conferred in them the gifts of the Holy Spirit. Once he was done with all the five deacon-elect, he said the prayer of Ordination to Diaconate. This prayer, directed to the Almighty God, asked that the Holy Spirit’s gift of seven fold grace be sent upon them to make them faithful Deacons. The conclusion of this prayer made the five seminarians Deacons in the Roman Catholic Church.

Secundo: the investiture with the liturgical vestments. The stole and dalmatic were bestowed upon them by the priests whom they lived with during their year of service. Remember, the five entered this celebration wearing just the alb with the cincture. Now, since they are Deacons, they will henceforth be putting on the stole (over their left shoulder and drawn across diagonally over their chests to the right side, then fastened) and dalmatic (they wear it over the alb and stole. It may be omitted either out of necessity or for less solemnity). These vestments signify their ministerial role. 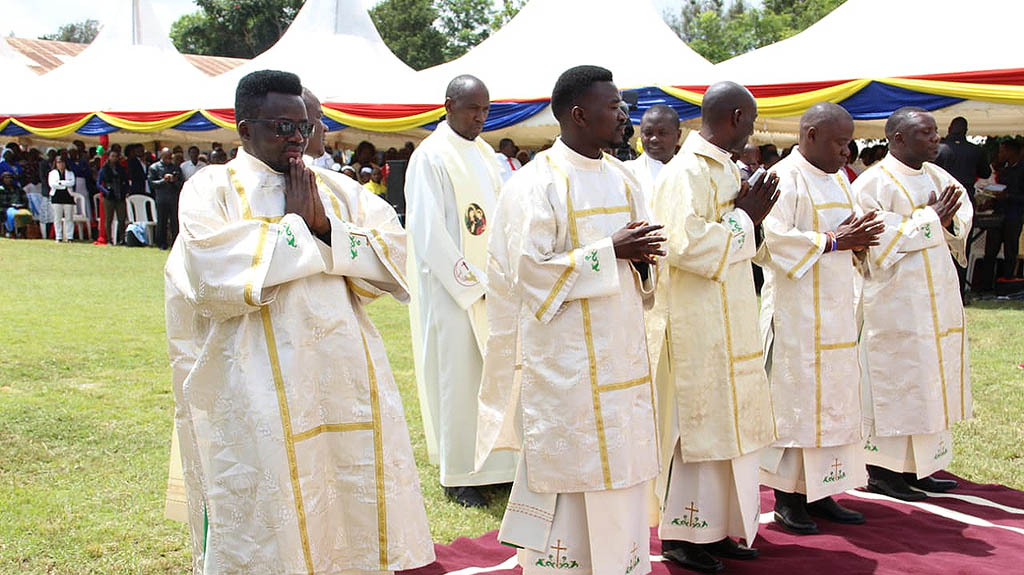 Tertio: handing on of the Evangeliary. The five newly ordained Deacons went before the Bishop. While kneeling, the Bishop placed the Book of the Gospels, Evangeliary, in the hands of each Deacon, while saying; “Receive the Gospel of Christ, whose herald you have become. Believe what you read, teach what you believe, and practice what you teach.” They will proclaim the Gospel and give homilies.

Towards the end of the Eucharistic celebration, Rev. Deacon Fernando J. Chissano, imc, a representative of the five newly ordained Deacons, shared their heartfelt joy, desire, and appreciation. Later, Rev. Fr. Peter Makau, imc, the Regional Superior Kenya-Uganda Region, gave votes of gratitude first to God, then to the Bishop and lastly to the congregants. He mentioned that His Lordship was to attend the Installation ceremony of Rt. Rev. Alfred Rotich Bishop of Kericho Diocese, which took place the same day, some 261.6 Km away in Kericho town. But the former, out of love and being a Consolata missionary, preferred to be with us and ordain our five confreres. He finally thanked the newly ordained Deacons and did a bit of missionary vocation appeal to the young men and women who would wish to join the religious vocation. 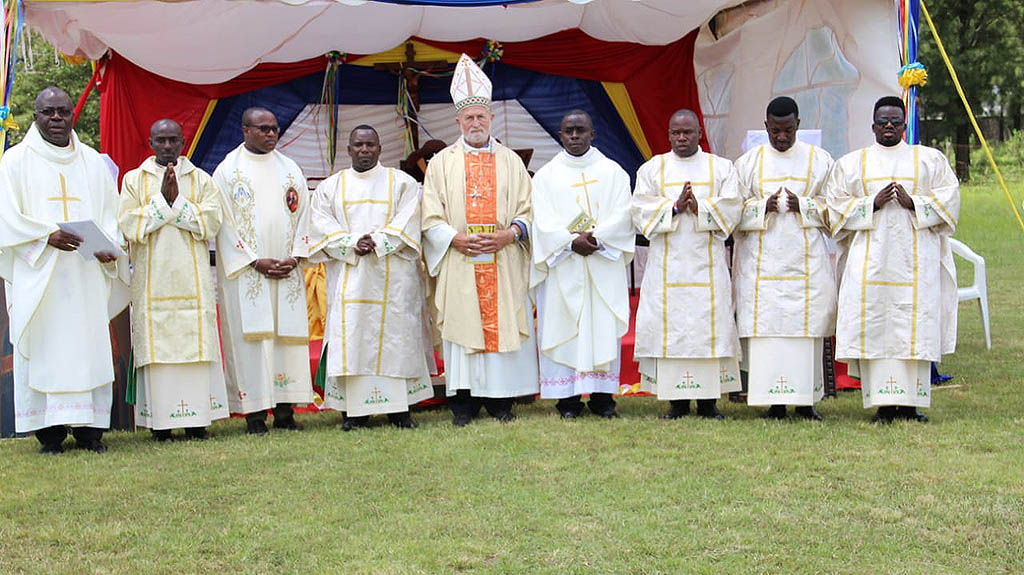 The religious vocation of these five new Deacons we celebrate today begun somewhere.

Rev. Deacon Ondiek Boniface Otieno, imc, was born on the 5th July 1989 in Muhoroni, Kisumu County, Kenya. He is the first born among six siblings in the family of the Late Mr. Albert Ondiek and Mrs. Sabina Achieng. He did his primary and secondary education in Muhoroni. In 2010 he joined the Propadeutic Year in Mathari, Nyeri County. From 2011-2014 he undertook his philosophical studies at the Consolata Seminary, Nairobi. In 2014 he joined the Consolata Novitiate, Sagana. In 2015 he took his First /Temporary Vows hence became a Consolata Missionary. From 2015-2019 he did his theological studies at Tangaza College. Later that year he was sent for the Year of Service in Rumuruti Parish, Nyahururu Diocese. On the 14th February 2020 he made his Final / Perpetual commitment as a Consolata Missionary.

Rev. Deacon Ernesto Isac Jose Manuel, imc, was born on the 24th December 1990 in Nampula Mozambique. He is the son of Mr. Jose Manuel Ernesto and Mrs. Angelina Duarte. After completing his secondary education in 2007, he opted to join the Consolata Missionaries in 2008. From 2011-2013 he did his philosophical studies at St. Augustine Philosophicum in Matola, Maputo. In 2014 he studied English language at Consolata Language Centre, Nairobi Kenya. In July 2014, he joined the Consolata Novitiate in Sagana, Muranga Kenya. On the 11th July 2015 he did his First/ Temporary Religious Vows and later sent for theological studies in Tangaza College. In 2019, after completing his studies, he was sent for the Year of Service at St Aloysius Gonzaga Wamba Parish, Maralal Diocese. On the 14th February 2020 he did his Final/ Perpetual profession in Allamano House, Nairobi. 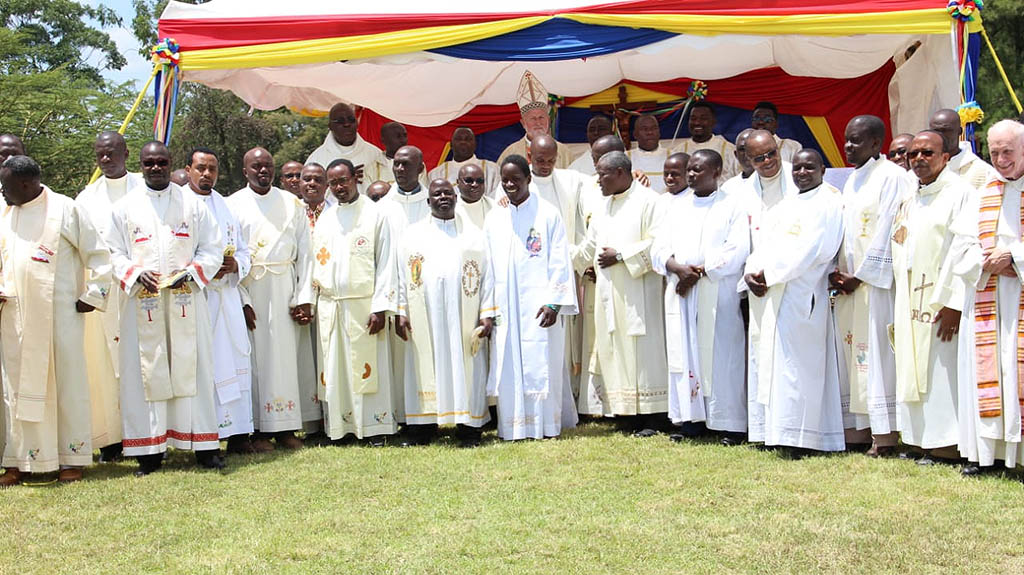 Rev. Deacon Kinyua Antony Chomba, imc, the last born among seven siblings, was born on the 28th March 1987 to Mr. Samuel Kinyua Gichimu and Mrs. Juliah Wangithi of Kirinyaga County, Kenya. Having completed both primary and secondary education, he joined the Bl. Joseph Allamano Propadaeutic, Mathari in August 2010. He then went to Consolata Seminary, Nairobi from 2011-2014. He later joined the Consolata Novitiate in Sagana and in July 2015 he took his First/ Temporary Vows. Between 2015 and 2019, he undertook theological studies at Tangaza College. He was later sent for the Year of Service in Thegu parish, Archdiocese of Nyeri. On the Valentine’s Day, he made his Final/ Perpetual commitment as a Consolata Missionary.

Rev. Deacon Fernando Joaquim Chissano, imc, first of two sons of the Late Mr. Joaquim Tafula Chissano and Mrs. Enora FernandoChissico, was born on the 31st March 1991 in Vilankulos, Mozambique. He did both his primary and secondary education in Vilankulos, Inhambane Province, South of Mozambique. He joined the Consolata Missionaries in 2007. From 2008-2010 he did the Propadeutic studies in Nampula. From 2011-2013 he studied Philosophy at Seminario Interdiocesano Santo Agostinho da Matola. He then started his Novitiate at Sao Paulo, Maputo on the 30th December 2013. He did his First/ Temporary Vows on the 26th December 2014. From January 2015 for six months, he did an English language course at the Consolata Language Centre, Nairobi. Then later, that same year joined the Tangaza College for Theological studies. After his studies, he was sent for the Year of Service at Matiri Catholic Parish, Meru Diocese. He made his Final/ Perpetual profession on the 14th February 2020 at Allamano House, Nairobi.

Rev. Deacon Avelino Pio Simao Nazombe, imc, son of Mr. Pio Simao Nazombe and Mrs. Isabela Frederico, was born on the 11th November 1985 in Mecanhelas,  Niass province,  Mozambique.  He did his novitiate in Maputo. He took his First /Temporary vows on the 26th December 2014. And on the 14th February 2020 had the Final /Perpetual profession at Allamano House, Nairobi.

Good to note that the day's events were harmoniously coordinated by the Master of Ceremony,  Rev. Fr.  Samuel Nyaga,  imc.  To all and the five Deacons,  we give glory to God.

Journeying with our people dur…