The words behind the Late Fr. Angelo Fantacci’s Funeral program leaflet are a summary of his life. They partly read; “Dear Fr Angelo, you gave your whole life to the mission of the Father, like a pencil in the hands of the artist: you allowed yourself to be sharpened and used freely until you were finished…”!

Indeed Fr. Angelo Fantacci, imc gave all his 95 years on this earth to be sharpened and used by the Lord.

Both his biological and religious anniversaries were in October! He was physically born on earth on the 14th day of October 1924. This event took place in Collepardo, the province of Frosinone in Italy. His parents were Vincenzo and De Poalis America.

His religious and missionary birth took place on the 2nd day of October 1946 in Certosa di Pesio, Italy. Three years later, on 2nd October 1949, he took his final commitment as a Consolata Missionary. Later was Ordained Deacon on the 14th day of May 1950, then a Priest on the 25th June of the same year.

Fast forward! The third day of the New Year Twenty twenty was a historical date. This is the day that saw the body of Fr. Angelo Fantacci, imc, having lived almost a century above the ground, lowered six feet under.

In the worldly optic, one would have expected to see many Europeans of Italian origin crowd the Italian War Memorial Church, Mathari, Nyeri for the Requiem Mass and final send off. But, alas! That was not the case. It was full of Africans, mostly Kenyans and specifically from the Coastal region where Fr. Angelo Fantacci, imc gave entirely his final lap of missionary service to God and to humanity. Actually, Italians were just a handful. 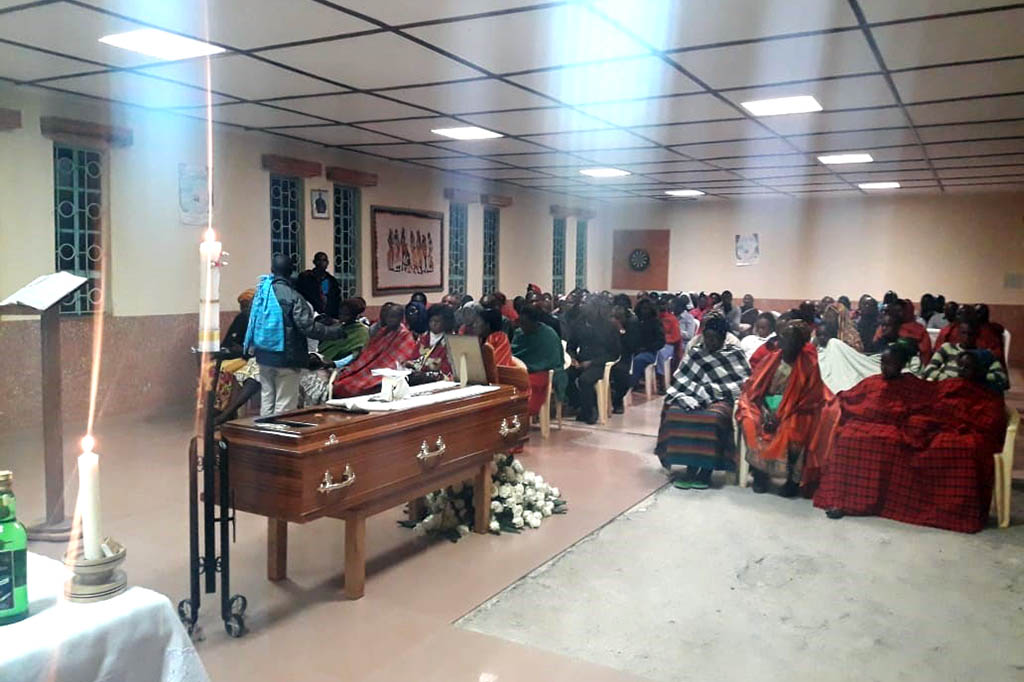 The Requiem Mass that begun at ten was celebrated by His Lordship the Most Rev. Virgilio Pante, the Bishop of Maralal Diocese. Among the many concelebrants was His Lordship the Most Rev. Peter Kihara, the Bishop of Marsabit Diocese, Rev. Fr. James Lengarin, imc, the Vice General Superior, Rev. Fr. Peter Makau, imc, the Regional Superior –Kenya Uganda Region.

In his homily, amidst little humour here and there, Bishop Pante lauded the deceased. He said that Fr. Angelo Fantacci, imc was a missionary governed by the divine wisdom. This was manifested indeed in the way he formed the Christian communities wherever he worked. He further said that this divine wisdom manifested itself in a practical way, for the deceased built several churches including the Archer's post, Maralal Cathedral, and many others, several schools and hospitals. He even expressed the wish that he would have been buried in the Northern Kenya (Archer's Post). He further mentioned that he won the spiritual race, because he had Eucharist as his daily meal that brought him salvation. The Bishop finished by encouraging all the Christians especially the clergy to emulate the lifestyle of the Late Fr. Angelo Fantacci, imc. 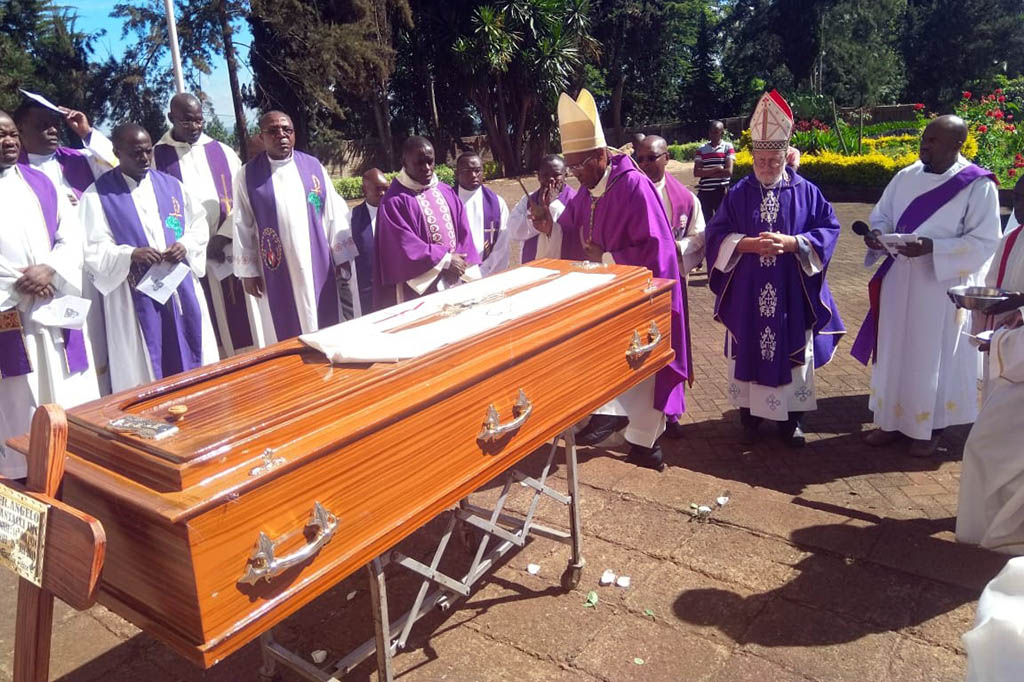 After several speeches and tributes, the Late Fr. Angelo Fantacci, imc was laid to rest at around one in the afternoon. His floral wreath was laid symbolically by little children who were present during the burial, for two reasons. One, he died on the 28th December 2019 on the Feast of the Holy Innocents. Two, it was a sign that indeed he was our Guka, grandpa!

Good to note that, the Late Fr. Angelo Fantacci, imc was the ‘padre opener’. Having arrived in Kenya in 1961, just two years before independence, already in 1962 he was the Priest in Charge of Kaheti Mission. Eighteen months later he started opening missions! He was among "the missionary pioneers" (Cf., Paolo Tablino, Christianity among the Nomads: The Catholic Church in Northern Kenya, vol. II, p. 96) who opened the Archer's Post mission (1964); Wamba Catholic Mission (1965); Likoni Mission (1975); Ukunda Mission (1996) and Timbwani Mission.

He will be fondly remembered by his famous dictum: ‘Mzee, kazi sio yako. ni ya Mungu’. 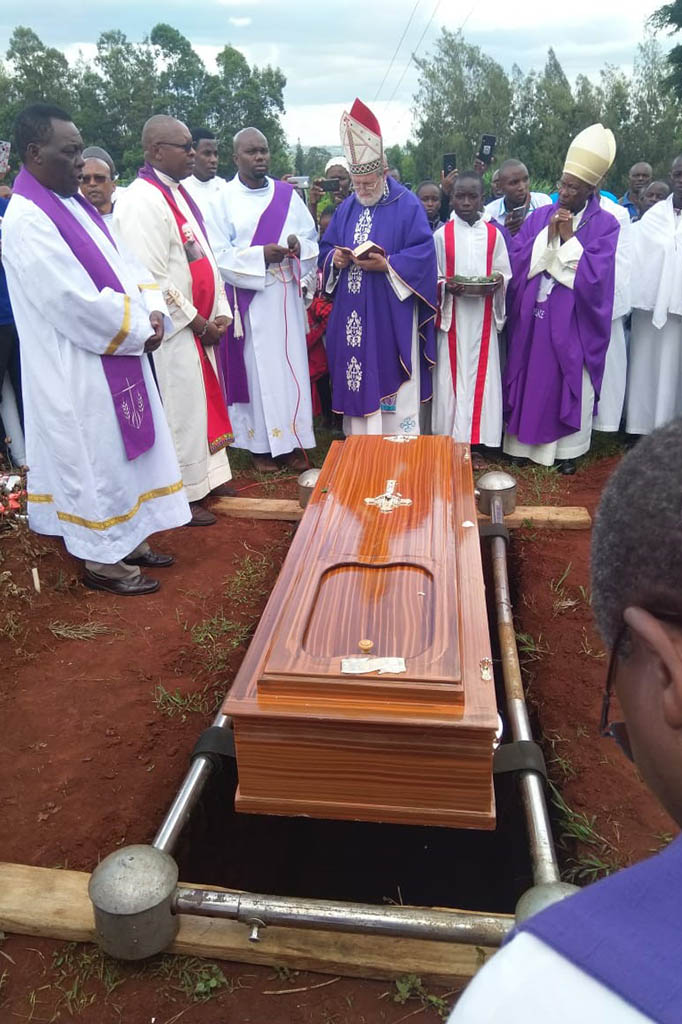